History of the 'Tables' 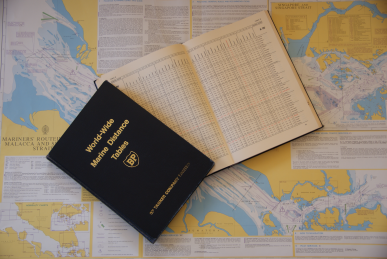 The 2nd Edition of the World-Wide Marine Distance Tables displayed on UKHO Chart 5502 - Mariners' Routeing Guide for Malacca and Singapore Straits. The AtoBviaC Marine Distance Tables are compiled using the full range of Admiralty Charts and Nautical Publications. Chart image reproduced by kind permission of the UKHO and is not for navigational use.

In 1958, the BP Tanker Company published its first set of World-Wide Marine Distance Tables. They were calculated by a large team of master mariners led by Captain W. M. Hutchison. All the distances were calculated using traditional navigational formulae and by physical measurements on charts. This edition was reprinted in 1968, 1971 and 1972.

The Second Edition of the Tables (pictured) was issued in 1976 when it was updated and enlarged into two volumes. The next significant development was undertaken in 1992 when the information contained in the Second Edition was produced as a program for use on a personal computer. Printing costs had made the production of new books very expensive for a publication which sold in relatively small numbers.

Following the stranding of the 'Braer' on the Shetland Islands in January 1993, Lord Donaldson was commissioned to produce a report looking at all aspects of the grounding and identified some shortcomings in the 1976 version of the Tables as they didn't take into account the implementation of IMO Traffic Separation Schemes. His report, which was entitled “Safer Ships, Cleaner Seas”, identified the need for an updated version of the distance tables which would "include all routeing measures agreed by IMO, advisory and mandatory".

The report appreciated that it would not be practicable for a single company to undertake the task and asked the Chamber of Shipping to consider taking over the publication. In 2000, a group of retired BP Shipping employees who had been involved with the Distance Tables for a number of years addressed the problem of producing up to date “Tables” using computers and electronic charts. AtoBviaC plc was formed to undertake the task.

A team of ten retired Masters were brought together to carry out the work which involved the plotting of routes in and out of each port and then connecting the various ports together using coastal routes and oceanic passages using a clearly defined set of navigational criteria. The process involved the calculation of many thousands of voyage calculations and extensive quality checking to verify the accuracy; viability and acceptability of the routes calculated.

The work was completed early in 2004 and following extensive testing and verification of data, the AtoBviaC Marine Distance Tables were launched on 30th June 2004 at the Barbican in London.

The Distance Tables continue to be kept up to date reflecting changes to routing as required by the amendment of and introduction of new Traffic Separation Schemes and other regulatory requirements. They continue to be expanded as new ports and terminals are added.

In 2015 AtoBviaC was acquired by CherSoft Ltd. This merger brings together the strengths of both companies, combining the software innovation and chart delivery capabilities of CherSoft with AtoBviaC’s global customer base and high quality routing data.

AtoBviaC's experienced team have built a highly regarded, market leading business, and we're excited about building on the AtoBviaC product offerings and the excellent level of service their team has been providing.