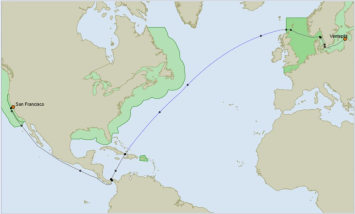 Emission Control Areas (ECAs) are shown in the PortToPort applications.

A route passing through ECAs can be scanned by the application, this inserts waypoints wherever the route enters or leaves an ECA. The distance within each area is aggregated and shown in the ECA Mileages box for each ECA encountered.

The routes are not adjusted to minimise ECA distances; the calculation made by the application is to find the shortest navigable route using the selected routing options. The selection of a route to minimise the cost of fuel for a voyage by taking ECA mileage into account is dependent on the differential cost between low sulphur fuel and “regular” fuel. This is complicated by the variable differentials between the ports where fuel may be shipped. When looking at this issue early in 2012 it became apparent that in most cases it is not cost effective to minimise ECA distances as the additional distance and additional hire costs exceed the additional cost of using low sulphur fuel.